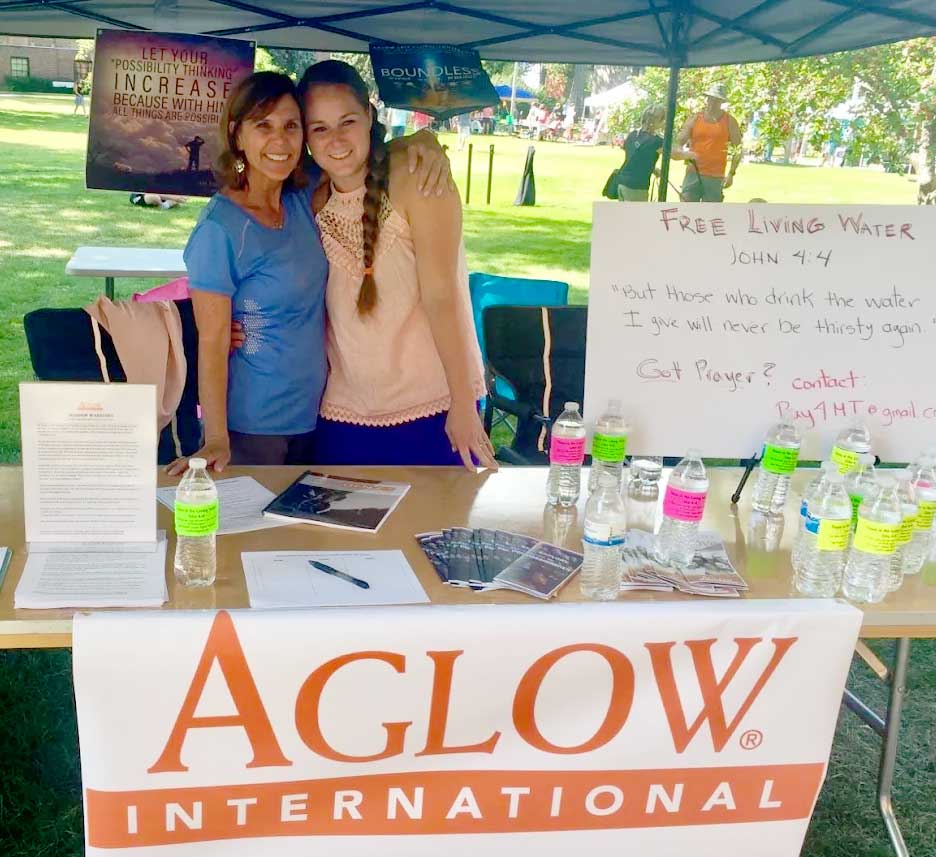 Montana State University holds a student welcome event each August called ‘Catapalooza.’ This is a two-day event where over 3,000 students and their parents walk among around three hundred vendor booths from the surrounding community of Bozeman, Montana. Montana Aglow was one of those booths.

Montana State University holds a student welcome event each August called ‘Catapalooza.’ This is a two-day event where over 3,000 students and their parents walk among around three hundred vendor booths from the surrounding community of Bozeman, Montana. Montana Aglow was one of those booths.

The Aglow team prayed for nearly one hundred people, and had a team of six women from two nearby Lighthouses. They prayed for healing, for moms and dads dropping off their children to college, for student athletes, foreign students, transfer students, children, and for Christians and non-Christians alike.

One of the highlights from the event was when a young Muslim woman asked for prayer. The team prayed for her, and when they were finished praying, she asked for prayer for her cousin who lives in Pakistan. He needed healing for his foot due to diabetes. After praying for him, she took out her cell phone asked if she could call him in Pakistan and have the team pray for him directly! It was midnight in Pakistan and her cousin didn’t answer the phone, so they texted him a prayer instead!

Another wonderful encounter was with a young transfer student from Germany. He told the team that he wasn’t sure whether Jesus’ resurrection was real. After some discussion they prayed for him and asked him to be open to an encounter with Christ. The team laid hands on his shoulder and just as the prayer was ending he shook his shoulder and said, “Something is happening—my arm feels hot!” Rejoicing, the team told him that the Holy Spirit was making Himself known.

God strategically placed the Aglow Montana team not only by the food truck, which was giving away free food, but also in between two booths that were desperate for freedom. On their right was the ‘Free Choice’ and ‘Feminist Club’ and on their left was a “church” that believed all roads lead to heaven. When asked about their belief in Jesus, they said they worship the message, not the messenger. The Aglow team was able to pray for both booths and the atmosphere of heaven was so strong around them that by the second day the ‘Free Choice’ club closed down early and moved.

Bonnie Minnick, Montana Area Team Vice-President of Public Relations writes, “Many of the students asked if Aglow was a church. We told them we held no denomination, but instead we were there to love and bless all people through the transforming power of Jesus Christ. Truly God is moving in the lives of our young people on campuses all around the country. It was a privilege and an honor to represent Aglow International to the people of our city.”

What assignment has God given your Generations group in your town?