I have personally been blessed by the Aglow family in many ways. It’s incredible to know that people internationally are praying on my behalf. There is nothing like having people in your life that are encouraging and supporting you. Every person I have met in Aglow has showered me with love. Now that I am older, I have had the privilege of speaking at two different Aglow meetings. These opportunities blessed me tremendously because the Lord gave me the opportunity to share my testimony of His faithful love in my life. 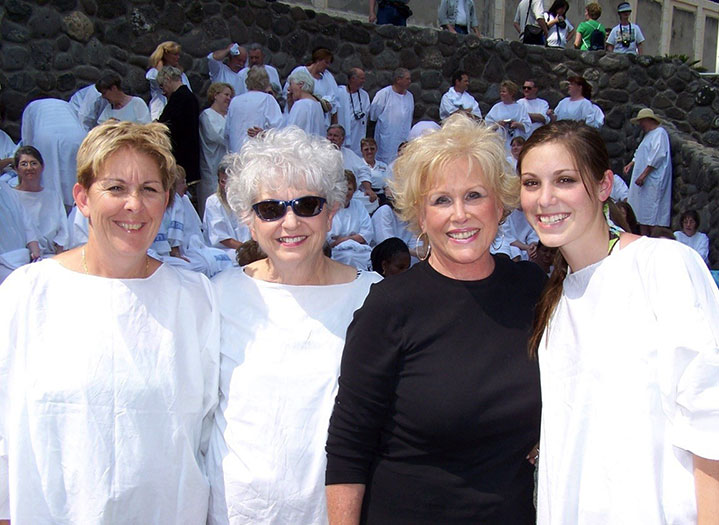 L to R: Leslie Lennep, Glenda Fleming, Jane Hansen Hoyt, Jamie Lynn MartinI have personally been blessed by the Aglow family in many ways. It’s incredible to know that people internationally are praying on my behalf. There is nothing like having people in your life that are encouraging and supporting you. Every person I have met in Aglow has showered me with love. Now that I am older, I have had the privilege of speaking at two different Aglow meetings. These opportunities blessed me tremendously because the Lord gave me the opportunity to share my testimony of His faithful love in my life.

Aglow International is an extraordinary, life changing ministry. Aglow is at the very heart of my family. From the moment I can remember, my family has been at the center of Aglow. My Ninny, Glenda Fleming, has served this ministry for 44 years. She first started attending meetings in her early 30s. Aglow made a huge impact on her life, as she first began serving as the Pascagoula Lighthouse President. Following that, she became the State of Mississippi Aglow President. In 1999, she became a member of the International Board of Directors of Aglow International, and shortly after, she became a US Director overseeing the South Region of the United States where she continues to hold both positions.

Faithfully serving alongside my grandmother, my Poppa, Billy Fleming, was given the nickname Mr. Aglow. For the past 5 years, my mom, Leslie Lennep, has been the President of the Ocean Springs Lighthouse, and she has served in different positions for 15 years. Since the age of 18, my aunt, Jamie Holland, has been apart of Aglow. She has held various positions the last 10 years, and she currently is the Israel Coordinator for the South Region of Aglow International.

From a very young age, I attended meetings with my mom, and in 2006, I had the privilege of traveling to Israel with my mom and grandparents. That in itself was a life changing trip. It was incredible to join together with men and women from all over the world. That trip was the moment the Lord put a burning desire to minister to children in my heart. After my Poppa passed away in 2015, men and women traveled from various areas to pay their respects. They lavished my family with love and prayers. I truly witnessed the bond the people in Aglow have with one another. As you can see, Aglow has greatly impacted my family. Aglow is intertwined in my family roots. To me, Aglow isn’t just a international ministry. Aglow is family. When you become a Global Partner with Aglow, you are actually being grafted into the loving family of Aglow.

I believe that Aglow can be a blessing to all people because everyone needs a community of believers who will encourage, love, and pray for you. Aglow is a place where you will encounter God’s presence and meet lifelong friends. Aglow is a network of people who desire to see others grow deeper in their relationship with the Lord and commit to sharing the gospel to all areas of the world. No matter the age, you will find spiritual sisters and mothers who will disciple and mentor you.

The Lord told me to be brave…to be bold…to be what He has called me to be. Countless people prayed for me and gave me encouraging words. After two weeks of being indecisive, I finally submitted to the Lord. I felt at peace with my decision, and I know the Lord has placed me in this position for such a time as this. I’m blessed that I have the opportunity to join the family of Aglow International and to follow in the footsteps of my grandmother and mom.

Mobile Evening Aglow hasn’t existed for seven years. I’m excited to be partnering with veteran Aglow women to officially relaunch this Lighthouse. Mobile is a beautiful place and a great area to live. Our city, however, is spiritually suffering. As I began praying for Mobile, the Lord showed me Ezekiel 37. He showed me that a spirit of death has been hovering over Mobile. The enemy has bound the people in grave clothes…grave clothes of murder, rape, robbery, and revelry. You see there is a church on almost every corner, yet there are so many people who are lost…that are spiritually dead.

The Millennial Generation in Mobile has been fooled into thinking that they can live by the world’s standards instead of God’s standards. They have traded in God’s Truth for their own ways of thinking. They pick and choose scriptures to follow. They willfully accept the ones that align with their convictions, and they quickly disregard the ones that contradict their choice of living.

I believe that God has put Mobile Evening Aglow together for such a time as this. I believe that God is going to begin to breathe life back into Mobile. He is going to bring us out of the grave and put His spirit in us. He is going to fully restore our hope. I believe Mobile Evening Aglow is the start of the army of the Lord in Mobile. I know the Lord is going to do unthinkable things in my city, and I’m so excited to be a part of it. I know that the Lord is equipping me and preparing me to be on the front line fighting for Mobile, AL.