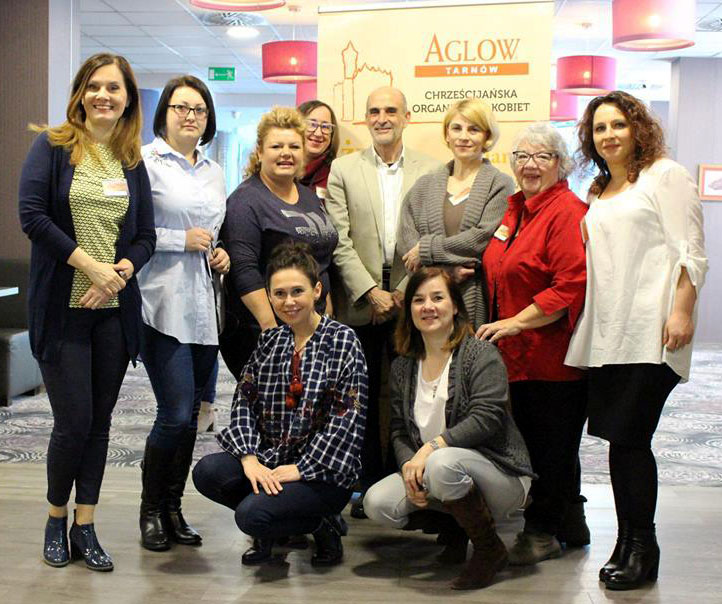 I was saved at an Aglow meeting and since that time my heart has always been with Aglow women. It was also my dream to take part in an international conference and when I heard that European Summit 2018 was going to be held in Krakow, in my country, I knew I was to be there. My dream came true!

It was a groundbreaking experience for me, a time of joy and freedom! I am more hungry for God now and see the need of sharing the gospel everywhere I go, because time is short. “He that has ears to hear, let him hear!” – Gosia Kluz

I was saved at an Aglow meeting and since that time my heart has always been with Aglow women. It was also my dream to take part in an international conference and when I heard that European Summit 2018 was going to be held in Krakow, in my country, I knew I was to be there. My dream came true!

It was a groundbreaking experience for me, a time of joy and freedom! I am more hungry for God now and see the need of sharing the gospel everywhere I go, because time is short. “He that has ears to hear, let him hear!” – Gosia Kluz

I was at an international Aglow conference for the first time and during those four days I had a time of my life. I saw Aglow as a huge organization built by women from almost every country in the world, having one goal – Jesus. This name joins all of us together. The words from Isaiah 60: 1-3 was the keynote of this conference: We are to rise and shine and the glory of the Lord rises upon Aglow! We were given a new mantle, kingly authority and dominion!

I was especially moved by prayer for young women rising in Aglow. They are like Ruth but without Naomi they cannot enter their calling. Naomi has a key to destiny for Ruth!

Thanks to Asher’s teaching I saw the connection between Israel and Church, our mutual dependence.

After the conference I’m excited and expectant of things to come – time of sons and daughters of God to be revealed, time of breakthrough and victory, time of a new wave of Acts! – Magda Jacobsen 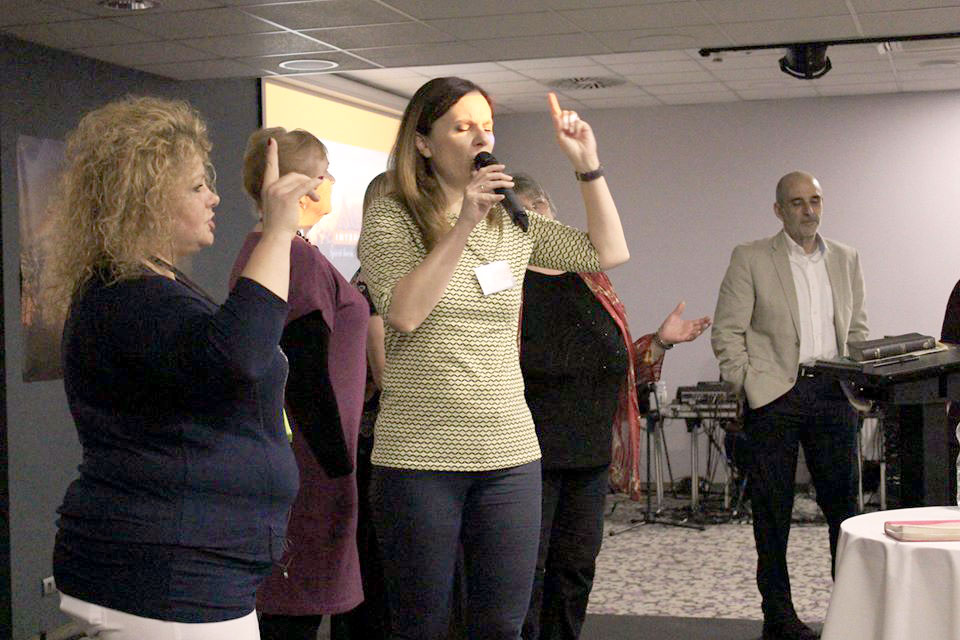 Praying for PolandWow! It was my dream to attend European Leaders Summit, I heard lots of stories from our leaders. But what I saw and experienced by myself is a completely different thing! I could see how big Aglow is all over the world, I met Aglow women from different nations, full of passion for God’s Kingdom. Holy Spirit was speaking to me through Asher Intrater’s and Jane Hansen Hoyt’s words – we are living in end times, time is short! I believe I was overshadowed by the vision and I truly feel that I am a part of Company of Marys – we need to prepare the world for the second coming of Jesus because we were born for His purpose, for such a time as this!

It was my privilege to pray with my leader, Barbara Skarbek, for Poland – my country. We prayed for revival and we called our nation to rise up and enter God’s Kingdom!

I also enjoyed a precious time of fellowship with my Aglow friends from Poland. Now I’m looking forward to the next conference. – Anna Wojtanowska

Going to the European Leaders’ Summit was a new thing for me. I have been a part of Aglow team in Tarnow for several years and I have known what Aglow is all about but in Krakow I saw so much more…. I saw Aglow as a huge movement having a global impact! I am built up by teaching and prophetic word from Isaiah 60:1-3 – Arise, shine; For your light has come! And the glory of the Lord is risen upon you! I am thrilled for our next Aglow meetings, new women that we are going to reach, and I am looking forward to new things the Lord is going to make! – Gosia Keogh 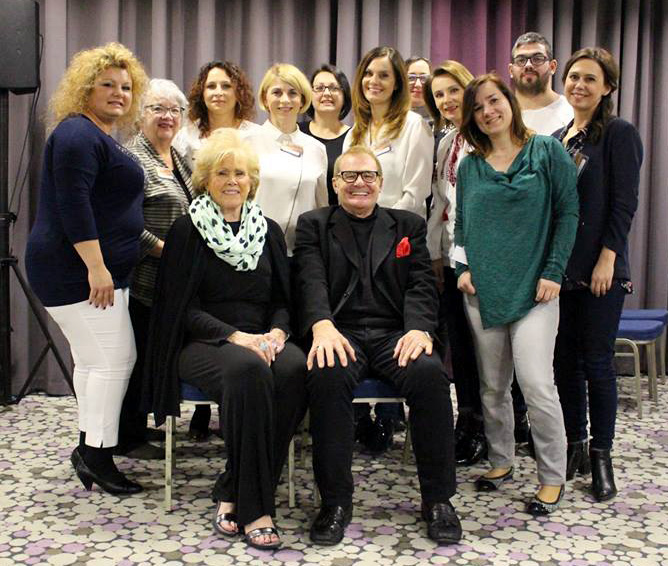 Polish Aglow team with Jane and TonyThe conference in Krakow was a special time for me, I am grateful to God for it! It was my first time to attend such a conference and now I can see how immense Aglow is, and I am proud to be a part of it. The conference fired me up to be involved in the work of Aglow even more. Asher Intrater’s teaching went deep down to my heart, especially the words that we are called to prepare people for the second coming of the King of Glory, prepare the Bride for the Bridegroom! We need to pray to expand our hearts to love each other and be friends to the lost. Just as Jesus loves us passionately, we should show the same love to people around us.

I was also moved by Jane Hansen Hoyt’s story – meeting two men telling her that time is short. We need to stand as one in such a time as this! – Anna Janus

As a National Leader, I took part in several Aglow conferences, but this time it was special, as together with Barbara we could take our Polish team with us. I was so happy that more Polish Aglow women could catch the vision and atmosphere of Aglow!

During the conference we had a wonderful opportunity to make friends with Asher Intrater’s team – Poles and Jews share a common history and I believe connection between Poland and Israel is strategic. The prayer for Poland and countries from the Eastern block initiated by Asher was powerful and I believe it triggered something in spiritual realm!

As for my personal experience, God was speaking to me during the time of worship. During one session, I could feel alignment with heavenly realm, being as one with God and His angels. Interestingly enough, Edda Swan had the same impression of angels joining us in worship, and the subject of ‘alignment’ (with God, Church of Christ and Israel) was raised by all conference speakers. During another session when Ruzanna, the violinist from Armenia, was playing I could hear the Lord speaking “Arise and shine!” Just a few minutes later Asher Intrater began his teaching with this word and throughout the conference we heard the scripture from Isaiah 60 several times! So, apart from wonderful, prophetic teachings, the spirit of prophecy was also on worship ministry and I was so blessed by it. – Justyna Serek

„New wine and new wineskins” – it has been my desire since I came back from the conference in Richmond. I invited my younger Aglow friends from my chapter in Tarnow to enter the breakthrough portal together. The European Leaders Summit in Krakow was a unique opportunity to hear Asher Intrater’s remarkable teaching, and experience Aglow atmosphere on a deeper level. Killing a few giants on the way (including raising finances for the conference), we were able to gather 11 people from our chapter and celebrate this special event together.

A dream to meet Jane Hansen Hoyt, whose newsletters and teachings are on a regular basis in our chapter, finally came true. Asher’s teaching stirred bigger passion in our hearts to be ready for the Lord’s coming and to draw more people with us, as time is short.

There was an especially moving and personal moment on Saturday night when we prayed for Poland. For the first time on a European Conference Poland was mentioned as crucial one in the upcoming biggest revival. Together with Anna, a woman from my chapter we could proclaim breath of God, His time, and dominion over Poland. I am proud that together with my Polish friends we are a part of Aglow movement, full of power and authority. I expect wonderful events that the Lord promised by His prophets in year 2018. – Barbara Skarbek

What a wonderful conference we had in Krakow! I was so delighted to return there and celebrate my 3rd anniversary of meeting Polish Aglow leader Barbara Skarbek and rejoicing in how that meeting led to me relocating to Tarnow, Poland. Surely a strategic re-positioning for the days ahead!

I need to tell a little back story about my relationship with Aglow. Over the years I had been to meetings in Anchorage, Alaska in the late 70’s and perhaps in New York in the 80’s and then again in Budapest, Hungary from 1997. I wasn’t ever an official part of Aglow. I would attend as the speaker and attend when there was an English speaker and as invited. Because of a wonderful friendship with Kati Henderson and Lilla Gere, I was invited to the conference in 2015. That led to me moving to Poland.

As our church, and Pastors Jan and Barbara Skarbek are totally committed to Aglow, so was I. I attended every monthly meeting, sometimes as speaker, but always attending. I was connected to Aglow as supporter of Barbara Skarbek. I even attended the Global Conference in Richmond, Virginia in October 2017 but really only to facilitate Barbara and Justyna Serek to go. (Fantastic worship, amazing speakers and incredible evidence of God’s presence and I am SO glad I was there but..)

But something happened to me during the January 2018 meeting. It was wonderful to hear the recap and watch the video clips of Richmond and amazing to hear Jane’s report of the new mantle, the new scepter and Aglow’s new authority and that it was for all of us!!! Then Asher Intrater and our relationship as Gentile believers to both Messianic Jewish believers and Arab believers. I loved how he modeled team and generational input. Then the girl on the Revive Israel team from France shared about the importance of Ruth and Naomi and how the Naomi’s needed to cry out for the Ruth’s so that we all are pulled into our destiny and become part of birthing and preparing the new ones coming into harvest for His second coming and suddenly things started to happen in my spirit.

It was as if I could see the threads of year of interests I have had, prayers I’ve prayed, words I’ve spoken/preached, things that caught my heart’s attentions suddenly come together as one and in that instance I felt clothed with that new mantle!!! My love for Jewish people, Israel, seeing men and women partnered together, modeling team, Kingdom work, moving into owning the field, not just gleaning the edges, especially Naomi/Ruth/Boaz and our church focus for the younger generations, the Mary company, being overshadowed by the Holy Spirit, even the mention of Jael was highly personal to me and – it all came together and I felt I became, suddenly, even prophetically, part of that large end time harvesting machine of Aglow!!! Truly a culminating moment that brought a fresh clarity, with more understanding to the prophetic Words I carry, and the realization that I am Aglow!

Not exactly sure of what all that means, but I am interested in gathering our Naomi’s to cry out for Ruth and now I head to our Aglow prayer meetings and this weekend’s Aglow meeting with new purpose and expectation, not just there but owning and preparing the field!

God bless you, fellow Aglow living stones! We are truly being built together for God’s purposes! – Mary Jill Callery