Recently, a team from Aglow Britain visited Romania to mentor and encourage the Generations Groups in Santandrei, Efrata, and Poiene.  Glenys Macdonald, Aglow Britain VP of Outreach writes, “Aglow Romania now has 3 Generations groups which are bearing much fruit for the Kingdom of God!”. 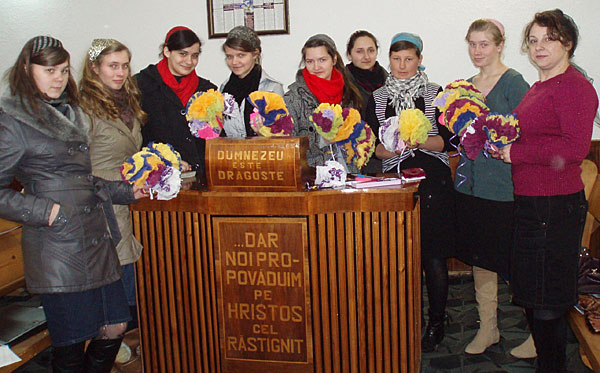 Recently, a team from Aglow Britain visited Romania to mentor and encourage the Generations Groups which they oversee.  Glenys Macdonald, Aglow Britain VP of Outreach writes, “Aglow Romania now has 3 Generations groups which are bearing much fruit for the Kingdom of God!” One group is located in Santandrei, another in Efrata, and the third is in the village of Poiene.

In addition to watching movies together, going on trips as a group, and celebrating birthdays, they are also learning how to pray prophetically, free and inspired by the Holy Spirit!  The group has been studying a book about important principles essential for young people, which include the topics of self-image, relationships, and holiness.

God has greatly increased the numbers attending the group which has expanded their vision.  They are now planning to establish a second Generations Group in Santandrei for younger girls.  Their desire is to train up new leaders from the teenagers who have been faithfully involved with the existing Generations Group to help facilitate the new group. The purpose of the new group will be to raise up young people with a pure heart to be witnesses of God’s love, power, and glory in their churches, villages, nation and world.

Efrata Generations Group
The Efrata Generations Group was formed from a number of young wives who enjoy spending time together sharing their life experiences. Not only do they share food recipes, but as young wives, they are learning how to form successful marriage relationships too.  The leader of the group, Ramona shares, “ It’s wonderful to see how God uses women in their families and also in the community.”  God is also using the young wives to help each other work through marital problems rather than getting a divorce, enabling their children to be raised securely in loving families in the will of God. The group believes that God will give them more opportunities to build new relationships with other young wives who don’t yet know God.

Poinei Generations Group
In Poinei an Aglow woman by the name of Irene approached a local pastor to ask how Aglow could support the needs of his church and village.  His immediate response was, “Help with the young people!”  Irene formed a Generations Group in his church which now meets monthly with young people ages 14-18. Each month, the program adapts to the needs of the group.  Some months they have prayer and discussion on topics relevant to young people, such as boy/girl relationships, or how to give your testimony.  Other months, they do craft projects which helps the group build relationships with each other.  The relaxed atmosphere of the meetings create a safe place for teeneagers to share their hearts. Irene reports that many have gained a deeper understanding of the cross and what that means to them personally.

These groups are truly demonstrating one of the Core Values of Aglow:  Living as communities who know they are THE BELOVED, establishing their identity as the Bride.