The Aglow European Leaders Summit in January 2017 was hosted in Riga, Latvia. Each year our leaders gather to hear from speakers, be encouraged, worship, fellowship and pray. Jane Hansen Hoyt, Haruun Ibrahim, and Thomas Sandell were the powerful speakers that blessed around 150 leaders from 30 European nations. We praise God for the great work He is doing through the ministry of Aglow around the world. Time together with our faithful leaders is cherished. 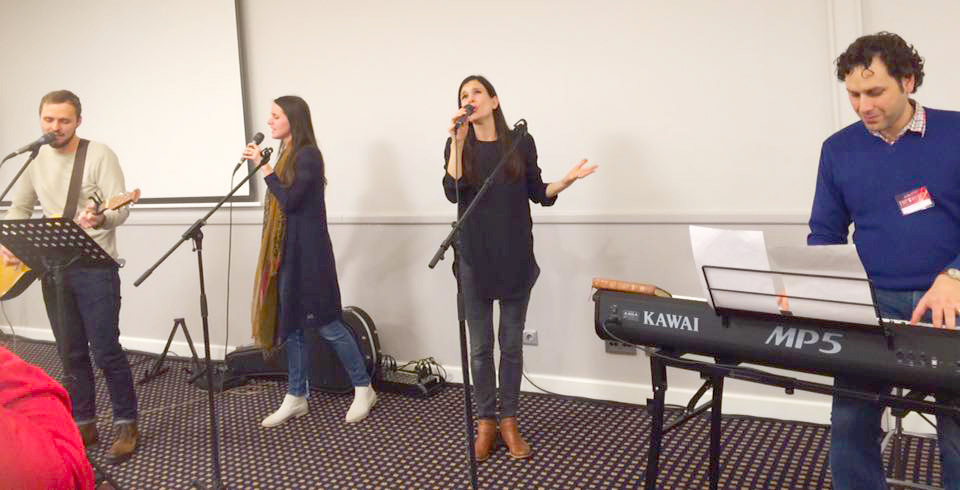 The Aglow European Leaders Summit in January 2017 was hosted in Riga, Latvia. Each year our leaders gather to hear from speakers, be encouraged, worship, fellowship and pray. Jane Hansen Hoyt, Haruun Ibrahim, and Thomas Sandell were the powerful speakers that blessed around 150 leaders from 30 European nations. We praise God for the great work He is doing through the ministry of Aglow around the world. Time together with our faithful leaders is cherished.

Below are testimonies from two young women who participated in the meetings:

A young woman from Denmark: What to say about Aglow conferences? Riga is my third in a row. I went to Krakow and Rome.

Around the time I was invited to the Rome conference I had started asking myself what Aglow is, what it stands for, and what it means for me. One thing is the monthly meeting, but another is understanding the global purpose. In the days between the two first conferences, God had called me, He had given me a job in His Kingdom, but had not told me about where I stand with Aglow.

The days in Rome were explosive. The Father started to show me women He wanted me to talk to, and tables He wanted me to sit at. In this second conference I met mostly leaders and prayer-coordinators from different nations, and I asked them all what Aglow is for them. Each and every one of them was Aglow, and they were different from each other.

This got me to thinking about the 2015 Aglow Global Conference where I was anointed to my service. I needed to be there in order to receive my mantle, to be anointed, to be ordained and blessed. Words cannot express how big this was. As I listened to the teaching of Asher I heard the answers to questions I’d been asking throughout the last year. His teaching also convinced me that some of the issues I had been thinking about were relevant, and I got reassured that I was on the right track. My heart was calm and pleased.

I am from Estonia and I live in Denmark. So going to Riga, was like going home. I was hoping to be guided through it the same way I had been in Rome, and it happened. I used some of the time to talk to the ladies I had met the year before, and since all of them were not present I had also time to meet new ones. As Christians we are on different points on our path. We might have passed a point where someone else is at and when they need help, we can offer that. We can also serve others with our specific gifts and help them where they need it. I got to experience both of the above mentioned at the Aglow conference in Riga. I do not see the exact plan and function He has for me, but He leads me from nation to nation. As long as He leads me, I don’t need to know His plan. I trust my Father.

As for the teaching, vision, purpose, structure and the ladies: My need to make a map and a structure is still there. And since I have not been in Aglow for 30, 40, 50 years or generations, this Aglow needs to be built up in me.

During this conference it became clearer to me, that the countries in Europe are different. Needs, resources, and groups vary from country to country, and in order to put ideas into action they need to be converted to local conditions. Tools serve best while in function. I was also thinking of information flow between groups – good ideas give birth to more ideas and being able to freely access activity reports from sister nations could be a good booster.

It started to dawn on me, that inside Aglow we have something for the prayer warrior, the caregiver, the teacher, and the evangelist, so while being a Watchman on the Wall we also need to make sure that there is a steady flow of watchmen to this wall and that they are fed and happy. Is one Aglow woman supposed to be all of them at the same time? Hardly.

The conferences I have been to have expanded my vision of Aglow immensely. I think it is healthy for each and every Aglow woman to see how many we are, who we are and what our different functions are. Why? For seeing is believing. My name is Kristi, I am Aglow. I think that He is working on that.

Hallgerd Akurstein – Faroe Islands: I was blessed to be part of this year’s European Leader Summit in Riga. It was exciting to see young people at the summit, too.

As we in Europe, and I believe all over the world, experience that things are changing in the world, I believe that Aglow’s mandates are more relevant than ever.

As you might have heard Aglow has three mandates:

The messages that Haruun Ibrahim shared about his work on the Channel Al Hayat, which is broadcasting to all the world touched me deeply. The mission with the channel is to educate and speak up against Islam. What they have experiences is that Muslims are tired of Islam. They don’t find it satisfying. Muslims in the Middle East experience attacks on their countries, cities and families from ISIL, and it makes them turn away from Islam. So as part of Aglow International we are encouraged to further prayer for Muslims that they will turn to Christ.

Thomas Sandell from European Coalition for Israel was also a speaker at the summit. He shared about the work of ec4i, where on a political and jurisdiction level they inform and educate politicians about Israel’s case. They talk of the sake of Israel in EU, to Parliaments all over the world and in EU, and also in the political atmosphere where they experience that things are not like they used to be. Thomas Sandell shared how surprised he was when Britain chose the Brexit, and how after that he knew there was a “wind of change” and Trump could win and later he would move the embassy to Jerusalem. All these things also encourage us to stand in prayer for the Jews, the nations of Israel, and just as importantly our own politicians and nation and the nations of the world, so they will stand with Israel.

The leader summit was a strong exhortation to continued prayer. And it confirm how important the mandates of Aglow are.

“Pray diligently. Stay alert, with your eyes wide open in gratitude,” and don’t forget to pray for us (Al Hayat and EC4I), that God will “open doors for telling the mystery of Christ.”