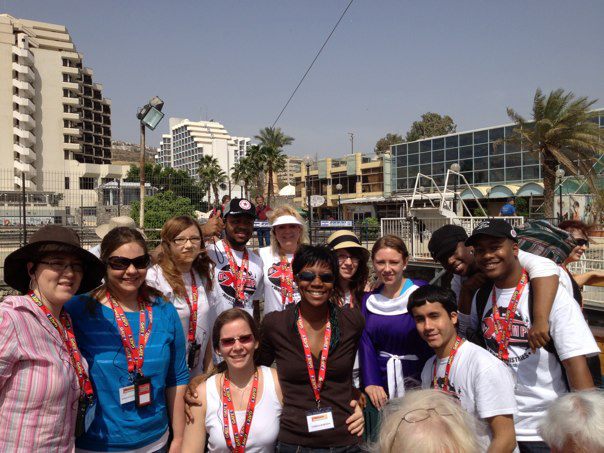 Generations Group boarding a
boat on the Sea of GalileeThe Aglow Israel Trip of 2012 hosted 14 young adults that had a life-changing experience. It was the first time a group of young adults came on the Aglow Israel trip and this is only the beginning! Each young person was in awe of walking where Jesus walked and to see the Bible come alive in a whole new way. The chance to travel to such a significant place and experience a new culture was an adventure they would encourage all young people to have.

Many people let finances hold them back from going on a trip like this and miss out on the surprises of the faithful and divine provision of God. One young man received a call back from a bank asking if he knew that he had a bank account with them. The account had been forgotten and the funds in it were able to pay for most of his trip. Another young woman received the largest tax return she had been given and it covered her trip.

When invited to come on the trip, a young lady from Texas felt God speak to her that she was going to go. She didn’t feel right about asking people for money but God gave her a dream that week. In the dream, she won the lottery and she knew this was God’s way of saying He would provide. Later that same week she received a large lump sum of money that paid for her trip. We serve a miracle working God, a God who has no end to His provision and who blesses His children. Will you step out, make a commitment to go to His Promised Land and watch Him provide? 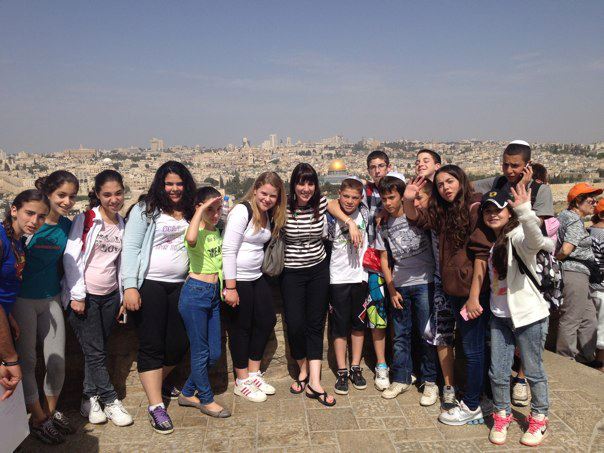 With Israeli school kids
overlooking JerusalemWe started the journey at the Sea of Galilee, where we worshipped on a Jesus Boat, visited the Mount of Beatitudes, and prayed in the Northern part of Israel towards the border of Lebanon and Syria. Some of the young adult’s favorite memory was being baptized in the Jordan River, as they were prayed over and blessed by leaders in Aglow. We walked the area of the Sea of Galilee where Jesus performed miracles and restored Peter after his denial.

The entrance into Jerusalem is always one of the highlights of visiting Israel. The outline of the city walls is breathtaking. God the Father chose Jerusalem (2 Chronicles 6:6), the son of God cried over Jerusalem (Luke 19:41), and God the Holy Spirit confirmed His Word in Jerusalem (Acts 1:4 & Acts 2:1-5). What a privilege to visit this significant place. We spent a time of prayer on the Mount of Olives in the Garden of Gethsemane. The Dead Sea and trip to Masada out in the Judean desert was a refreshing time enjoying Jewish history and taking a dip in the sea. Worship took place in the caverns of Hezekiah and in a close proximity to Mount Moriah where Abraham brought Isaac to be sacrificed. We closed our trip having communion at the Garden tomb and a time of proclamation at the field where David slew Goliath.

Everyone young person that came on this trip, said yes we would come again and would encourage all young people to visit Israel. Our goal is to get at least 30 young adults on the Israel Trip of 2013 so that we can have our own bus. If we can fill a bus, we will be able to do certain activities geared toward young adults.